This is the 4th in a series of posts written by John Tholking. Proving that you have ancestors who lived in Cincinnati before December 31, 1820 can be quite a challenge, but the rewards are worth it. Your ancestors could be recognized as part of the "First Families" lineage group. Proving their residence in Hamilton County may require consulting some unusual records, such as those described by John in this post. The clerk of the township assigned marks of identification to be cut in ears of cattle.  Fences were not plentiful and it was common for livestock to be pastured together or to wander off.  Branding did not appear until 1820.

A slit, a penny, a crop, a half penny, a swallow fork, a nick, a saw tooth, a slope, and a "poppler" leaf were markings used to form numerous patterns cut into the ears of cattle for identification.

Membership in First Families is open to descendants of pioneers who were residents of Hamilton County before December 31, 1820.  Applications or requests for forms may be sent to FFHC, Hamilton County Chapter OGS, PO Box 15865, Cincinnati, OH 45215-0865 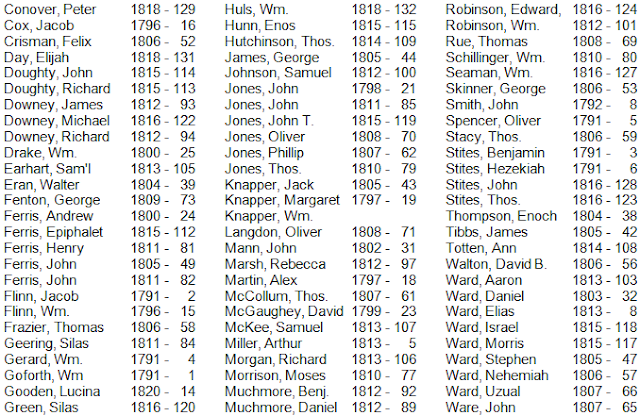