Last Saturday was the annual Lock-In for genealogists at the Main Library. Registered genealogists had the opportunity to do their research from 6:30 - 11:30 PM with the aid of our fine library staff from the Genealogy and Local History Department. About 45 people attended this year's event.

The HCGS Tech Team provided another option for attendees this year. The Tech Team offered five mini-technology programs in the Computer Lab adjacent to the Genealogy Department. Each program lasted about 15 minutes, with participants free to select from a menu of opportunities and come and go as they pleased. At the end of each session, members of the Tech Team offered assistance as needed.

This was the first time we had tried something like this, and the Team was very excited about the number of people who chose to participate. The number of participants ranged from 9 - 17 with an additional five Tech Team members available for assistance. Since the Computer Lab has only 18 computers, we couldn't have been happier with the turnout. Some members stayed for all five sessions.

At the end of the evening, the group was surveyed as to Tech Programs they would like us to sponsor in the future.  Three requests included using newspapers for genealogical research, scanning and photo editing. All three of these programs are in the pipeline for the future.

We would like to thank Chris Smith, Patricia VanSkaik and the other librarians who made this after-hours opportunity available to our members. As a first-time attendee, I'm already looking forward to next year's event. 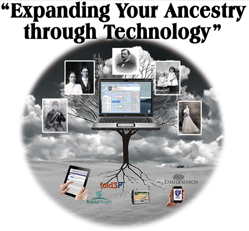 In addition, I'd like to encourage you to sign up to receive regular updates on the conference blog. Like this blog, you can receive updates automatically by supplying your email address. I know when you look at the program and/or the blog, you will be excited about the lineup and diversity of offerings at this conference.  The focus is on how technology can support your genealogical pursuits.

Should you wish to submit articles for this blog or the conference blog, please contact Kathy Reed at khreed@cinci.rr.com.

Annual "Lock-In" at the Library

The annual "Lock-In" at the Main Branch of the Library will take place on Saturday, October 27th from 6:30 - 11:30 PM. This year, in addition to an opportunity to do personal research, members of the HCGS Tech Team will be presenting a Taste of Tech. In the Computer Lab adjacent to the Genealogy and History Department, participants will have the chance to explore up to five different tools that could be useful to genealogists. 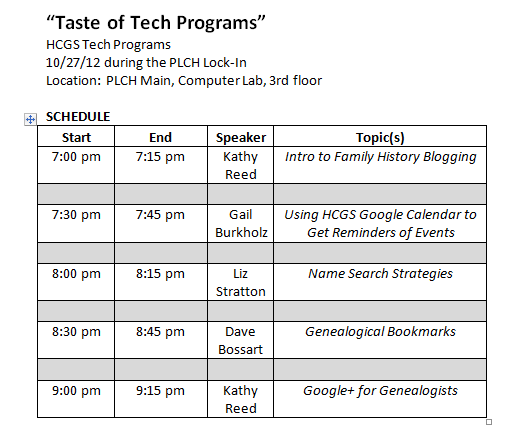 Participants of the Lock-In can look over the schedule and decide if one or more of the topics is of interest to them. Those interested in presentations by Kathy Reed or Gail Burkholz will need to have a Google Account in advance should they want to try out these applications in the lab. You can create a Google Account by "googling" create a google account and following the directions. The page will look similar to the one pictured below.  Don't forget to confirm the email that is sent to you and make sure you remember your password. 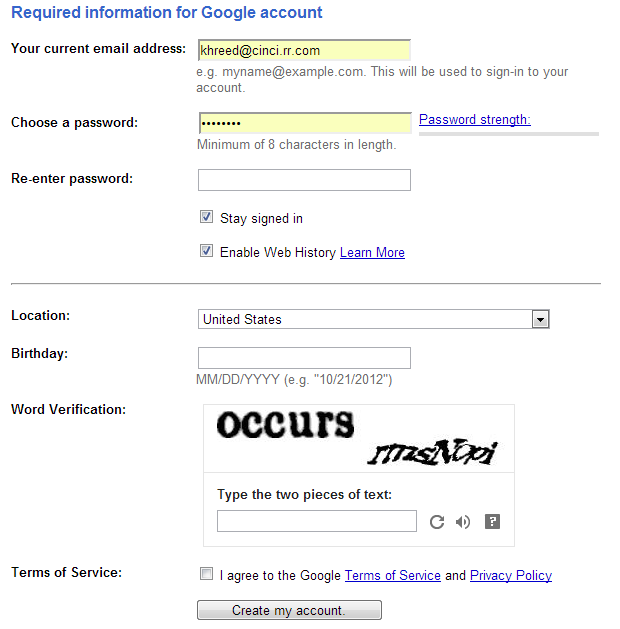 The Library Friends' Shop is also staying open until 8PM during the Genealogy Lock-In. Buyers can get a 10% discount on the items they purchase. 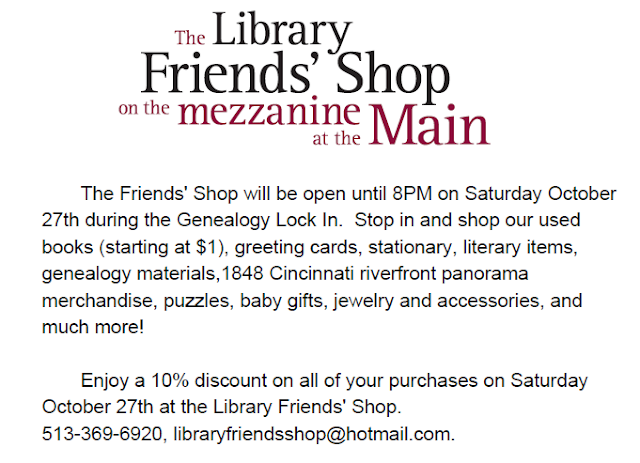 Unfortunately, a check of the library's registration site shows that there already is a waiting list for this year's Lock-In. Should you be one of the forty who pre-registered, I look forward to seeing you there.
Posted by Kathy Reed at 10:29:00 AM No comments:

Goettke and Murray Families Find Their Past 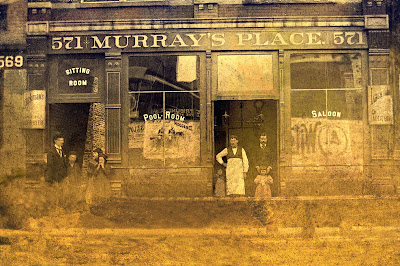 Sr. Lois Goettke exclaimed, “We’re related?” as researcher Marian Dietrich revealed the connections between their two families.  Actually Lois and Marian are related on both sides of Marian’s family, a fact only discovered after Marian agreed to do some research for Sr. Lois for a family history program for the Hamilton County Genealogical Society.  Marian’s research revealed connections to Sr. Lois’s family on both her mother and fathers sides of the family.  Marian revealed another connection between the Goettke family and John A Schehl organist and choirmaster at St. Francis Seraph for 33 years and St. Leo for 20 years and Joseph A Schehl violinist with Cincinnati Symphony Orchestra and composer; Assistant Director of May Festival whom they had known all their lives, without knowing about the familial connection.  Marian presented Sr. Lois with a thick notebook filled with reports and documents supporting her research; she had documented all four of Lois’ main lines back to their immigration from Germany.

During the second part of the program, the decendants of Michael Murray learned that some of the various addresses that the Murray family called home in the Queensgate area of Cincinnati were actually the same physical place.  Street name changes and house numbering changes led to the misconception that the family had moved more often than they actually did.  The area is now covered with industrial sites, railroad tracks, and interstates.  The family had a picture of the saloon that Michael established in 1884 at 571 W. Fifth St., opposite the passenger depot for the Cincinnati, Hamilton and Dayton Railroad.  They did not know when it was taken or who the people were, other than proprietor Michael Murray.  Through her detective work and use of city directories, census records, and Sanborn fire insurance maps, genealogist Linda Dietrich dated the photo and made tentative identification of the people as other members of the Murray family.

Murray’s Place, 571 W. Fifth St., established in1884.  Because of street number changes, this picture was prior to street numbering changes made in 1886.  With that in mind, the people in the photo are tentatively identified as - right to left - son Thomas, 12; son Michael, Jr. 7; twin daughters Mary Jane and Ellen, 5; bartender, possibly Michael’s brother Johnny’ Michael Murray, 47;  and daughter Catherine 2 years old.

Do you have pictures of mystery relatives?  Do you know where your family lived 100 years ago?  History is fun when you have a personal connection to the time and place.  Join the largest growing group in America and start researching your family history today.  Staff at the Cincinnati Public Library and the Cincinnati Historical Archives are waiting to help you in your search.

Last Saturday, October 6th, was Family History Day at the Main Library. This annual event is always a hit with local genealogists and provides "one-stop shopping" for members of the public who have an interest in family history.

Since 2012 is part of the sesquicentennial of the Civil War (1861-65), the theme for this year's talks was the Civil War.  HCGS Board Member, Liz Stratton, discussed "Researching Your Civil War Ancestor Online." Included were online sources and strategies for Civil War genealogy research, along with additional historical, photographic and military resources available online.  Liz's talk went way beyond "order your ancestor's Civil War pension file."  I don't think a person in attendance walked away without additional resources for their research arsenal.

The second part of the day provided patrons with the opportunity to "Ask the Experts." Representatives from a variety of area organizations were available to answer individual questions and share their expertise on a variety of topics. 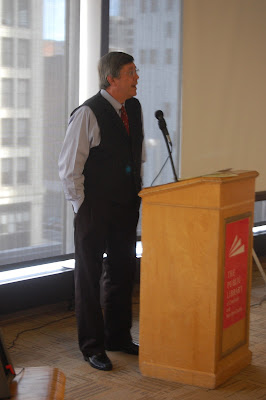 The final speaker of the day was Mike Rhein representing the Cincinnati Civil War Roundtable. He discussed William Haines Lytle, Cincinnati's legendary military officer, Congressman and poet. As I had a gg-grandfather who served under William Lytle, I very much looked forward to hearing about this exceptionally brave leader who never shirked his responsibility to those he led. Lytle, who had been previously injured in battle in what is now West Virginia, was fatally shot at the Battle of Chicamauga. Soldiers from both the north and the south paid tribute to Lytle following his death, reciting his poetry around their campfires and preserving his body for its return to Cincinnati.

Anyone familiar with Spring Grove Cemetery is undoubtedly aware of the monument marking the grave of this proud Cincinnatian. One of the panels on the memorial displays Col. Lytle leading his men in that final battle. 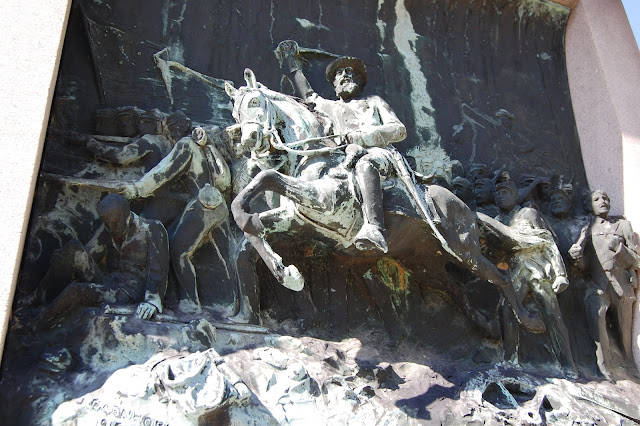 We Cincinnatians have a proud heritage. Thanks to the Public Library of Cincinnati and Hamilton County for helping us get in touch with our roots by bringing in experts on all aspects of our history.  I look forward to next year.