“Researching Your Ancestors Using Church Records” will be the topic of the regular monthly meeting of the Warren County Genealogical Society on Wednesday, November 19 at 7:30 p.m.  The guest speaker will be Jeffrey G. Herbert, past president and current treasurer of the Hamilton County Chapter of the Ohio Genealogical Society.

Herbert has more than 20 years of experience in genealogical research and writing with a focus on local history.  He has authored more than 15 publications identifying and indexing local sources to aid researchers.  He is an expert in German research and old script handwriting.

Church records memorializing baptisms, marriages, deaths and burials often include information which can be extremely useful in identifying and sorting out family relationships.  However, they are often overlooked or considered too difficult to obtain, particularly by beginning or intermediate level researchers.  This presentation identifies valuable entry points for these vital sources of information.

The meeting will be held in the Phillippi Meeting Room of the Campus Center at the Otterbein-Lebanon Retirement Community, 585 State Route 741, (north of State Route 63), Lebanon, Ohio.

The event is open to the public, and is free.  No reservations are necessary, and everyone is welcome!

For more information, contact the Warren County Genealogical Society
at (513) 695-1144 or wcgs@co.warren.oh.us 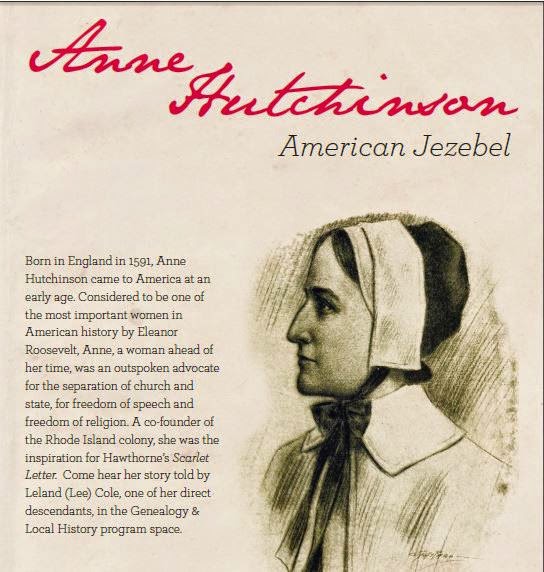 Mr. Leland Cole, long-time member of the Hamilton County Genealogical Society, will be presenting two lectures at the Main Library on November 15th. If you enjoyed the Quaker talk presented last month, this talk will extend your understanding of the Quaker influence in the early days of our country.

Lee will also discuss "Turmoil in the Ukraine" at 2:00 PM. The nation of Ukraine has experienced recent violent turbulence in a very stormy relationship with her Russian neighbor. Lee Cole, past President and current Board Member of the Center for Economic Initiatives and developer of a Marshall Plan prototype that has assisted many Ukrainian businesses, has first- hand knowledge of the current situation, and will provide a thorough overview along with historical background. This program is part of the Library's new "World Affairs" speaker series.

Who Was Anne Hutchinson?

Anne Hutchinson was born in Alford, England in 1591 where she was educated.  Later she went on to become one of the most important women in British America.  Eleanor Roosevelt felt Anne was one of the five most important American women – Ever.  She is greatly responsible for Separation of Church and State and Freedom of Speech and was the inspiration for Nathaniel Hawthorne’s Scarlet Letter.

Anne, a fiery red-head, was very thoroughly trained on the Bible by her father the Rev. Francis Marbury and became skilled on debating the subject.  Her mother taught her how to be a mid-wife, a skill she would later use in America.  When 21, Anne married Will Hutchinson, also from Alford, whose family ran a very successful woolen import/export business.  Soon after, the government increased business taxes the couple decided to move to America.  On the ship she taught sessions on the Bible to other passengers.

The Hutchinsons built a fine house in Boston near that of Governor John Winthrop, the outspoken, autocratic, Puritan Governor of the Massachusetts Bay Colony.  Anne continued to give lessons to small and ever increasing groups of local women.  These popular sessions were eventually attended by up to 80 people, both men and women.  Winthrop was enraged as Anne had differing views of “Salvation.”  He could not get her to change her mind so put her on trial.  The first day, Anne successfully defended her position against Winthrop and the clergy.  At the end of the second day, Anne was convicted and banished from the colony.  A second trial excommunicated Anne from the Puritan church.

Anne and Will fled to Providence where they negotiated with the Indians and settled in Pocasset, now Portsmouth, thus becoming co-founders of Rhode Island.  In the meantime, Winthrop continued to send ministers to meet with Anne and try to get her to recant her statements.  She would not.

In order to avoid these meetings, the family decided to remove to Pelham Bay (now the Bronx) and negotiated with the Dutch for land.  Sixteen people, including much of Anne’s family moved.  The land was located between the warring Dutch and Lenape Indians.  One day Anne was informed, through the Dutch that the Indians and Chief Wampage would attack.  Anne refused to leave the camp since she never before had any trouble with the Indians.  The Indians attacked, slaughtered all the inhabitants and animals and burned the camp.  It looked as though there were no survivors.  However, Anne’s youngest daughter, Susannah, was in the meadow picking berries and hid when she heard the screams and saw the smoke.

Wampage found Susannah, adopted her, and took her into his village.  She lived with the Indians for seven years until finally she was ransomed by her uncle, Edward Hutchinson.  She returned to Boston where she married John Cole.  Eventually they moved to Kingstown in Rhode Island to manage the Hutchinson’s property.