Over-the-Rhine Then and Now

Anne, with the support of several other organizations, identified several landmarks in the OTR community, and set out to compare the current with pictures from the past. A website has been developed that explains the project, its goals and its partners. The pictures that are displayed around the neighborhood from now until the end of March are featured in a slideshow. You can click on an interactive map of the locations.

I spoke with Anne to try to understand why the pictures will only be available through March. She explained that they had to apply for permits to post and display the images. She is offering two walking tours in March, with the possibility of additional events.

If you don't already know Jim, let me introduce you. If you are a regular reader of The Tracer and the Gazette, you are probably aware of the many contributions Jim has made to the digitization of Hamilton County records. He, and his team of volunteers, are responsible for many of the records that are posted on our website and on FamilySearch.org. Over many years, Jim has worked at the Hamilton County Recorder's Office as a volunteer. He was responsible for bringing in a team from LDS who spent an entire year digitizing property records.

One of his talents has been in his ability to uncover formerly "missing" records and restore them before they were destroyed. These were often hidden away in a warehouse. He is now working on a project to catalog all of his finds.

In recognition of his contributions, Jim was recognized by the Hamilton County Recorder's Office as an "Honorary Archivist." I can personally attest to how valuable some of these records have been in my own research.

So if you run into Jim, be sure to thank him. He is one of the people who makes the Hamilton County Genealogical Society one of the best societies in the country. 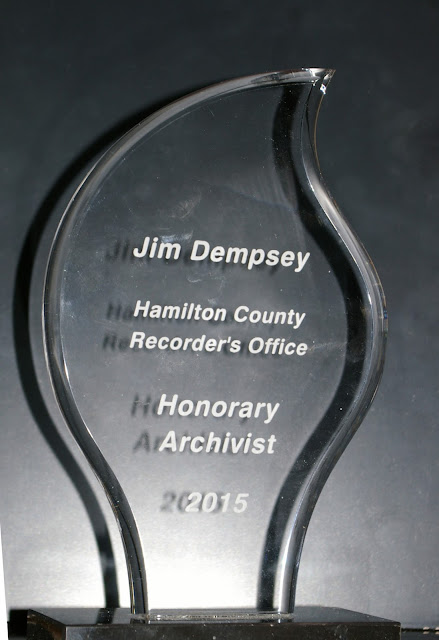