Will You Have Some Time to Volunteer for NGS? 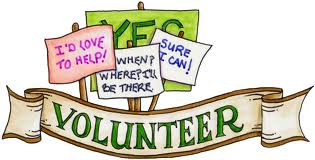 Once you get a chance to look at the NGS 2012 Conference syllabus (http://www.ngsgenealogy.org/cs/2012syllabus) and pick your sessions, you might see that you'll have some spare time during the Cincinnati conference. Please consider volunteering! It takes many, many people to keep everything running smoothly during such a large conference, and it's a fun way to get to know other genealogists.

Registration workers, Ask Me hosts, Exhibit door monitors, Syllabus Station attendants and a few Session monitors are still needed. If you would like to volunteer but you're not sure what is involved, email Jean Nathan and she will send you a copy of the Volunteer Manual which explains everything. If you have questions or wish to volunteer, contact Jean at ngsvolunteers@gmail.com.

The Ohio Genealogical Society and the Hamilton County Chapter are the local hosts for the Conference, and it's our job to provide the volunteers. We thank you in advance!

It Was a Great Day for HCGS!

Mary Remler initially saved the books from destruction.  To quote Paul Harvey, Jim's role is "the rest of the story." This is one more great example of the work done by HCGS members to preserve records that future generations will find invaluable. I can't wait to get on the Hamilton County Recorders's website myself and do a little snooping.

Consider leaving a comment in the comment box below.  I'm sure Jim and Mary would love to read your feedback. Just click where it says "comments" and a drop-down box will appear.

Saturday at the library was a great day for the Hamilton County Genealogical Society.  Our Program Chair, Linda Dietrich, introduced Dr. Frank "Mike" Davis who shared his research techniques.  For anyone who has ever wondered how to begin researching a family member, Dr. Davis provided us with a step-by-step method. Theresa Heglin was the focus of his research.  He was able to trace both her maternal and paternal lines back several generations and described how he dealt with a "brick wall" he encountered while tracing her family.

One of the best parts of the program was when he asked if anyone recognized any of the names he was discussing in a Census document.  A member of the audience volunteered that one of the family members was her grandmother.  Dr. Davis was able to introduce Theresa to a first cousin once removed.  (He had arranged for this introduction and Theresa's "newly-identified" cousin brought pictures to compare). It was a nice surprise to all in attendance.

Following the talk, Chapter President Kenny Burck, transitioned to a Chapter Meeting.  One of the first items of business was to introduce Director-at-Large Jim Dempsey and Chapter Treasurer Liz Stratton.  Both Jim and Liz had headed up separate indexing projects during this past year.  Both were a tremendous success with volunteers agreeing to index records remotely.  Several indexers were chapter members who live out-of-state.  In recognition of their efforts "Certificates of Appreciation" were distributed.  Names of recipients will be in The Tracer.


Barbara Gargiulo, Publications Director, was presented with an award in absentia for her many years of work this the Chapter.  Kathy Reed also received a Certificate of Appreciation for her work with the Chapter Blog.

Jeff Herbert discussed the National Geographic (NatGeo) program The Decrypters:  Body Snatchers episode.  He had assisted in some genealogical research in an effort to identify bodies uncovered in the Washington Park renovation. One of our other members, Dr. Peter Frame, University of Cincinnati Professor of Medicine, was also featured on the program.  He discussed the impact on Cincinnati as we lived through repeated cholera epidemics. As part of the program, local historian Dan Hurley showed how a map of the rivers could be superimposed directly over a map identifying cholera outbreaks. The rivers, with their untreated water, served as superhighways for transmission.  If you haven't yet seen this episode, it is scheduled on cable's NatGeo station for Thursday, April 26th at 4:00 PM.

The next Order of Business was the election of Officers and Directors.  Margie Mohr, Chair of the Nominating Committee, introduced a proposed slate:

President Kenny Burck called for additional nominees from the floor.  In the absence of any volunteers, Linda Dietrich moved that the entire slate be accepted by acclamation. The motion was seconded and the motion passed.

The membership acknowledged the long-term contributions of Kenny Burck as he takes his place on the Board as Past-President.  The meeting was adjourned.
Posted by Kathy Reed at 12:13:00 PM No comments:

Featured in this month's issue:

If you are not a member, e-memberships are only $10 per year and allow access to the members pages of the website including downloadable PDFs of the Tracer and Gazette.
Posted by gail burkholz at 9:27:00 PM No comments:

You are probably aware the Washington Park near Music Hall in Downtown Cincinnati is undergoing a massive renovation.  The park covers what had once been an early Presbyterian/Episcopalian Cemetery.  When the park was initially constructed in the mid-nineteenth century, graves were moved to other cemeteries in the city.

When construction on this project began in August 2010, additional human remains were uncovered.  You can read about this and related stories here.  Interestingly for us, the story was intriguing enough to the National Geographic Channel to include the results of an investigation in their series "The Decrypters."  The program will air on NatGeo on April 19th at 8:00 PM.

I will be setting up my DVR as the showing coincides with our next Chapter Board Meeting.  Thanks to Jeff Herbert, Chapter Vice-President, for making us aware of this exciting program, so relevant to Cincinnati history. 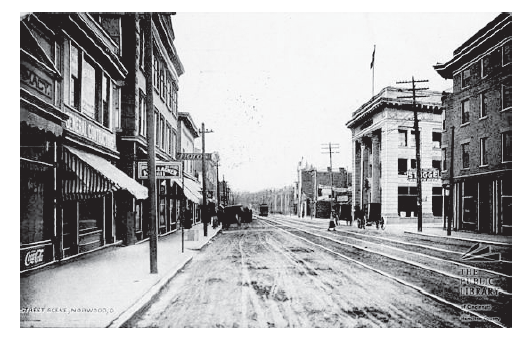 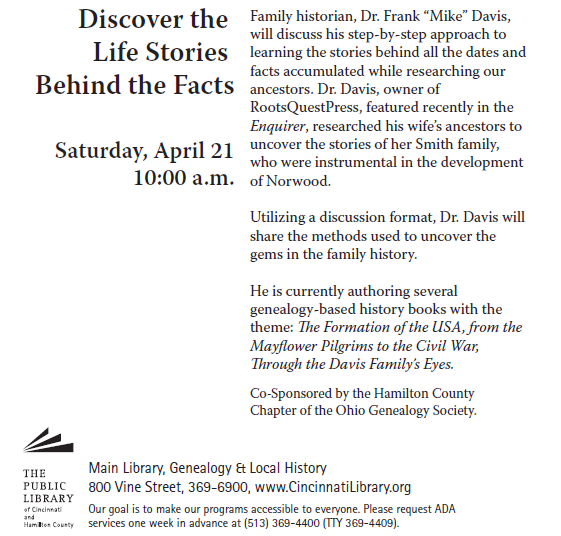 An exciting program is planned for our April Chapter Meeting.  With the release of the 1940 Census, many of us are trying to put "flesh on the bones" of our ancestors.  Dr. Davis will share with us his tips and techniques for doing just that using the resources that are available to genealogists.  At the request of our Program Chair, Linda Dietrich, Dr. Davis took up the challenge of researching an "unknown" person.  He will share his discoveries with all of us.  It promises to be an interesting program.

We encourage as many members as possible to attend as the meeting will also include the election of officers and directors.  In addition, several members will be receive recognition for their contributions during the past year.

It's going to be an exciting spring.  Several out-of-town members have already let us know that they will be attending the National Genealogical Society conference in May. We hope to see you then.

Remember:  If you are receiving this post by email, please click on the title in order to see the flyer that describes the April program. http://hcgsohio.blogspot.com