I have always had a personal interest in "Morgan's Raiders." Researching the raid is what hooked me on genealogy. My gg-grandfather, Britton Wainright, died while on a march to confront Morgan and his band of raiders as they crossed over into Indiana near Louisville. We will hear all about the raid from author Lester Horwitz at our 40th Anniversary Celebration to be held on November 2nd. Mark your calendars. There are commemorations being held all across the state of Ohio beginning July 13th when Morgan crossed into Ohio at Harrison, Ohio. The Ohio Civil War 150 group sponsored by the Ohio Historical Society has published a list of these events.

The events in Harrison on July 13th include a reenactment of the raid between 1:00 and 2:00 and a Civil War encampment on display throughout the day. On Sunday, July 14th, there will be events in the Sharon Woods Village, the Gorman Heritage Farm and the John Hunt House in Blue Ash. To read about each individual event, click on this link.

Note: This list is an image -- you must click on the link button in red above to read about each event. 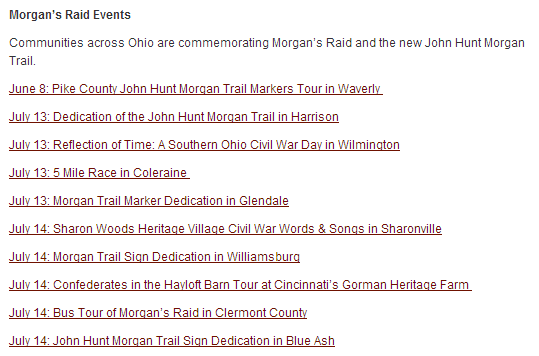 I will be thinking about my gg-grandfather, born in Cincinnati in 1819. He was the grandson of a Revolutionary War soldier. Thanks to the National Archives, I have copies of handwritten letters describing Britton Wainright's death from heat stroke on July 9th, 1863. Here is a sample of one of the letters: 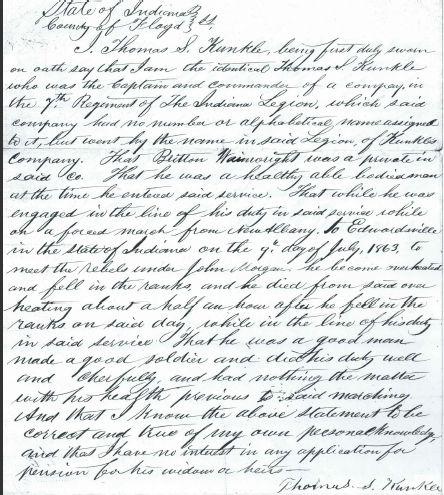 Transcription: From the account of Captain Thomas S. Kunkle, commander of a company in the 7th Regiment of the Indiana Legion.


"That Britton Wainright was a private in said Co. That he was a healthy able-bodied man at the time he entered said service. That while he was engaged in the line of his duty in said service . . . to meet the rebels under John Morgan, he became overheated and fell in the ranks, and he died from said overheating about half an hour after he fell in the ranks on said day while in the line of his duty in said service. That he was a good man made a good soldier and did his duty well and cheerfully, and had nothing the matter with his health previous to said marching."

Britton was one of about four documented cases of people dying of heat stroke on that very hot July day. In one case, a woman carrying water to the soldiers fighting a skirmish in Corydon, also succumbed.

The July Gazette is now online. You can find it on the HCGS Website at by clicking on this link. Listed are some of the events scheduled from August - November. 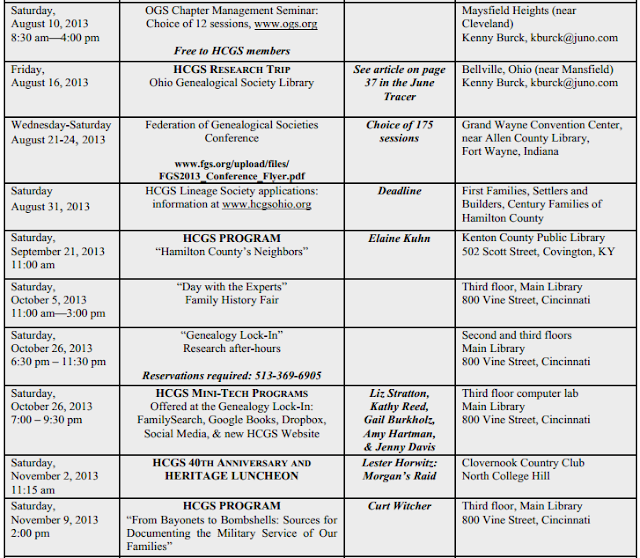