It's Been a Busy Summer

During a typical summer, HCGS Board Members tend to slow down and use the additional time to pursue their own research and other priorities.  NOT THIS SUMMER! You may recall that the Board had a meeting in January to brainstorm ideas for the future direction of the Chapter and identify plans for moving forward.  As a result of that planning session, committees have been working to update the bylaws, plan programs, study possible improvements in technology and make the Chapter as responsive as possible to the needs of our current and potential members.

The review of the bylaws has been completed and Board members are working to finalize updates to the Policies and Procedures Manual.  President Jeff Herbert graciously allowed us to work on these updates at his home. Past President Margie Mohr has worked diligently to complete this task before turning responsibility over to Kenny Burck. Hopefully, the membership will experience the results of our efforts during the upcoming year.

On August 18th Kenny Burck, Jenny Davis and Kathy Reed represented our Chapter at the 27th Annual OGS Chapter Management Seminar.  Kenny Burck was the Seminar Chair for this meeting sponsored by the Ross County Chapter.  There were nine sessions ranging from "Preserving Chapter Records and Publications" to "Attracting New Members for Your Chapter."  A representative from LDS gave an optional presentation on using the resources of familysearch.org. If you've never considered attending one of these seminars, I highly recommend it.

Lots of Events in October

Since October 1989, German-American Heritage Month has been sponsored in the Ohio Valley by the German-American Citizens’ League, which was founded in 1895. The month is centered around October 6th, which was the day in 1683 when the first permanent German settlement was established in .  October is also Family History Month.

The Hamilton County Genealogical Society will be hosting its Heritage Luncheon on Saturday, November 3rd, at the Clovernook Country Club. 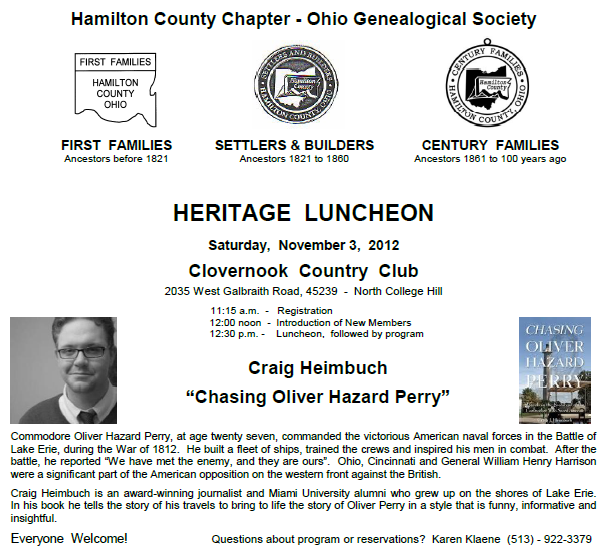 As this is the 200th Anniversary of the War of 1812, our guest speaker, Craig Heimbuch, will enlighten us about this "Forgotten War" and its significance in the formation of Ohio. This event also allows Chapter members the opportunity to recognize members who have successfully proved that they have direct ancestors who lived in Cincinnati at least one hundred years ago.

Members who are eligible for one or more of these recognitions should consider applying. If your ancestor is eligible for one of the Lineage Groups, they would also be eligible for the corresponding group at the Ohio Genealogical Society. The deadline for submission to Hamilton County is August 31st, but applications to the state are not due until December 31st. Since the Ohio Genealogical Society Conference is scheduled for Cincinnati in April 2013, this would be a great year to submit your family for one or more of these recognitions.

A copy of the registration form can be downloaded from the Chapter Website by clicking on this link. Applications and instructions for the three lineage groups are available on the website.

Submitted by:
Kathy Reed
Posted by Kathy Reed at 4:00:00 PM No comments:

If you are not already a member, memberships start at only $10/year. More membership information is available on our website.