Mary Remler on WVXU on Sunday at 7:00

I know, I know -- Sunday, February 3rd is Super Bowl Sunday. Call it a case of bad timing, but Mary Remler, former HCGS Cemetery Chair, is being interviewed by Lee Hay for Around Cincinnati. Her interview will broadcast at 7:00 PM, Sunday, February 3rd, on WVXU (91.7). Click on this link to connect to the recording of her interview. Note: you cannot share this article from within the picture below, but you can share the entire post by clicking on one of the options at the end of this post. 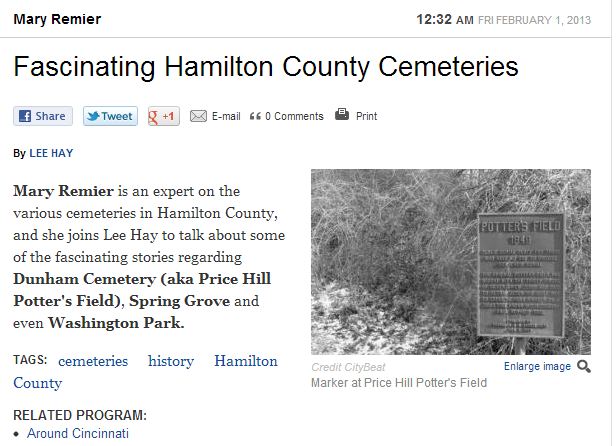 Being a relative "newbie" to this organization, I had never met Mary Remler. Jean Morrison, HCGS Vice-President, knew I wanted to meet Mary. So she invited me to lunch with Mary and Jane Fitzpatrick, our new Cemetery Chair. Was I ever in for a treat!

Mary is a walking/talking source of information about cemeteries, current and "extinct" throughout Hamilton County. As I listened to her stories, I thought it would be valuable to record some of her recollections, primarily about long-abandoned cemeteries. Lee Hay at WVXU agreed to interview Mary, and we were off.

Mary talked to me on the phone about some of what she knows about these abandoned cemeteries. It is her dream to write a book entitled "Forgotten Memories." Here is some of what Mary told me.

I personally can't wait to hear how Lee Hay manages to condense Mary's vast knowledge about abandoned cemeteries into a ten-minute interview. One thing for sure, I'll be one of the first in line to buy Mary's book.