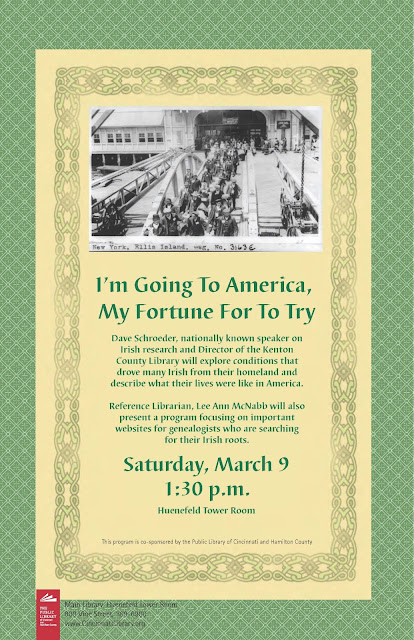 Linda Dietrich, Program Director, submitted this additional information for publication in The Tracer.

[The Streams of Bunclody,  Anonymous]

From the Act of Union on 1 January 1801 until 6 December 1922, the island of Ireland was part of the United Kingdom of Great Britain and Ireland. During the Great Famine, from 1845 to 1849, the island's population of over 8 million fell by 30%. One million Irish died of starvation and/or disease and another 1.5 million emigrated, particularly to the United States. This set the pattern of emigration for the century to come.
The Plantation of Ulster in Northern Ireland resulted from the organized colonization (or plantation) of Ulster by people from Great Britain, especially by Presbyterians from Scotland. Private colonization by wealthy landowners began in 1606, while the official plantation controlled by King James I of England (who was also King James VI of Scots) began in 1609. All land owned by Irish chieftains, the Ó Neills and Ó Donnells along with those of their supporters, who fought against the English Crown in the Nine Years War, were confiscated and used to settle the newly arrived colonists. Considerable numbers of Ulster-Scots emigrated to the North American colonies throughout the 18th century, 160,000 settled in what would become the United States between 1717 and 1770 alone.

When these citizens of Southern Ireland and from Ulster emigrated to North America, they often disdained, or were forced out of,  the heavily English regions on the Atlantic coast.  Most groups of Ulster-Scots settlers crossed into the "western mountains," where their descendants populated the Appalachian regions and the Ohio Valley. Here they lived on the frontiers of America, carving their own world out of the wilderness. The Scotch-Irish soon became the dominant culture of the Appalachians from Pennsylvania to Georgia, many settling  in Cincinnati and have helped to shape our region for more than 300 years.
Dave Schroeder, MSLS, will explore the conditions that drove many Irish from their homeland and what their lives were like in mid-century America, for the Hamilton County Genealogy Society’s Irish-focus program on March 9, 2013.  Mr. Schroeder, a nationally known speaker on Irish Research, is the director of the Kenton County Kentucky Library and is president of the Friends of the Kentucky Public Archives Association.

Following Mr. Schroeder’s presentation, Lee Ann McNabb will present a program focusing on important web sites for genealogists who are searching for their Irish roots.

The program is co-sponsored by the Public Library of Cincinnati and Hamilton County and will take place at 1:30 pm on Saturday, March 9, 2013, in the third floor Huenefeld Tower Room at the Main Library at 800 Vine St., Cincinnati, OH.  Anyone interested in genealogy research, especially for Irish ancestors, is invited to attend this free event.  For further information about this or any program of the HCGS, contact Program Director, Linda Dietrich at lindabelle@lcs.net
Posted by Kathy Reed at 11:28:00 AM